The Institute of Animal Science (IAS) participated in the ANIMAL TECH 2019 Gold Medal at ANIMAL TECH International Fair for Livestock Production. A total of 30 exhibits were entered for the competition. As the only research institute there, IAS registered two exhibits, namely the Carcass hanging pelvic hook and the Emission reducing air filter for pig farms. The latter was shortlisted by the jury and was nominated for a special award. 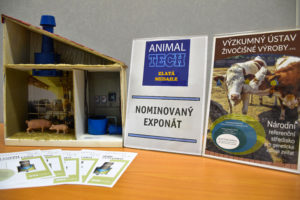 The nominated exhibit “Emission reducing air filter for pig farms” was designed in cooperation with the company AGE s.r.o. It is a simple emission separator that can be fitted to existing ventilation systems and can be used on farms with both old and new technologies.
The financial support of the project within which both the exhibits were developed was provided by the Technology Agency of the Czech Republic TAČR GAMA.